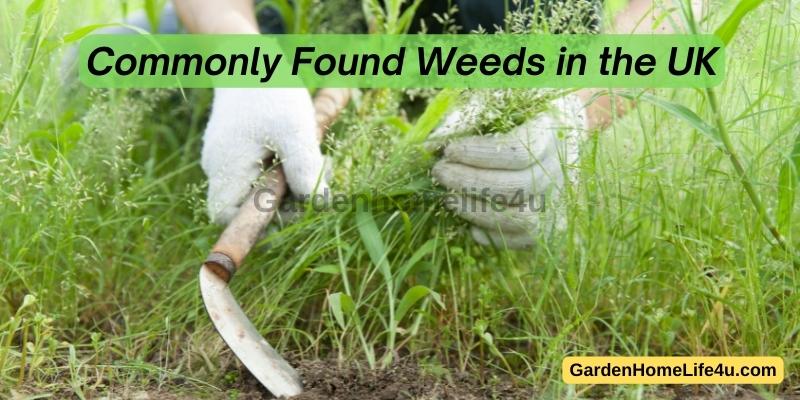 Weeds are a rampant problem in the UK. They are not only unsightly and hard to remove, but also pose a serious threat to the local environment by reducing biodiversity, choking out other plants and causing erosion. However, there is good news! You can help make a difference by getting rid of these weeds before they spread across your garden. In this blog post, we’re going to show you some common weeds that you should take special care of in order to keep them under control! 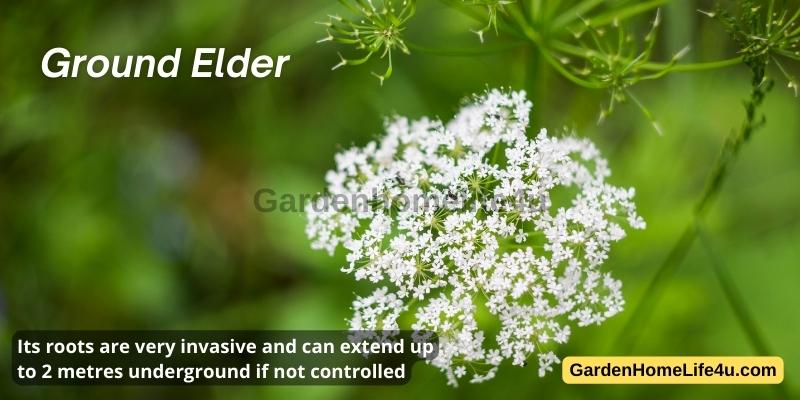 Ground elder, (Aegopodium podagraria) is a perennial weed that can be found in most gardens. It’s a member of the carrot family, so it likes to grow in long, thin patches and produce purple flowers. Its roots are very invasive and can extend up to 2 metres underground if not controlled.

The ground elder must be controlled by cutting back the entire plant right down to its base or digging out all of its root system. 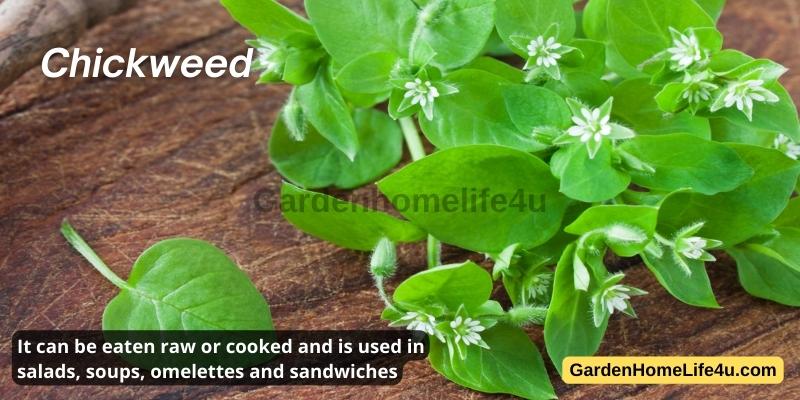 Chickweed is a perennial herb that grows in lawns, gardens and wasteland. It can be eaten raw or cooked and is used in salads, soups, omelettes and sandwiches. The leaves can be made into a decoction to make tea which has been said to help reduce high blood pressure. In some cases it can also be used externally on wounds by making a poultice or ointment with chickweed as an ingredient. 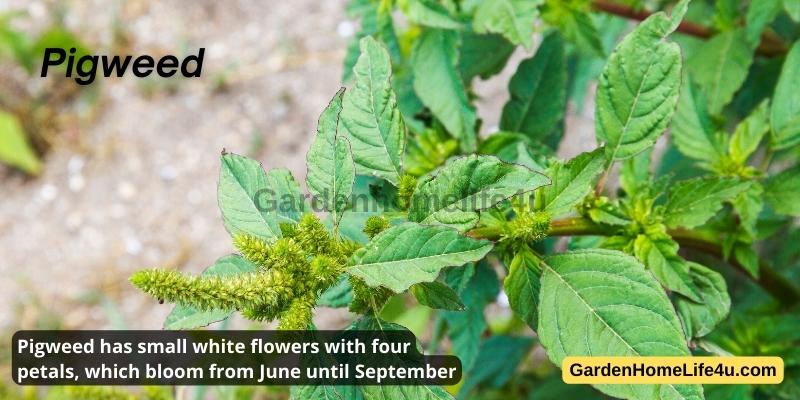 Pigweed is a broadleaf weed. Its leaves are smooth and heart-shaped, with five to seven lobes that taper to points. Pigweed has small white flowers with four petals, which bloom from June until September. The seeds are round and black when ripe and can remain dormant in the soil for several years before germinating.

Pigweed is a summer annual, meaning it grows during spring or summer but dies back in winter. This weed likes warm weather; it’s considered an invasive species because it can grow rapidly even under cool conditions such as late fall or early spring when other plants aren’t growing much at all! Pigweed prefers arable land (crops) over lawns and gardens because its long taproot allows it access to nutrients in deep soil layers where other plants will usually not be able to reach them since they have short root systems that only grow near the surface of loamy soils like those found on most farms.”

Morning glory is a climbing plant that has been cultivated for its attractive flowers. It is also a weed in the UK and can grow up to 2 metres tall. The flowers are blue, white or purple and are usually open during the day time. The seeds of this weed are poisonous and should not be eaten by humans or animals. The leaves are heart-shaped, with each leaf having 7 to 13 lobes on it. 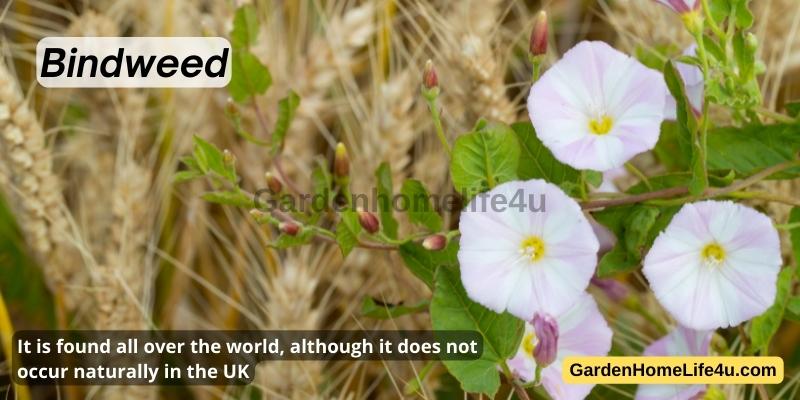 Bindweed is a climbing perennial vine, with white flowers and long tendrils that twine around other plants. It is found all over the world, although it does not occur naturally in the UK.

Bindweed grows in a variety of soil types and prefers moist conditions; it roots deeply, which makes it difficult to control by digging out or hoeing because new shoots come up from underground roots.

The leaves are alternate and heart-shaped with pointed tips (acute); they have five to seven lobes that can be either smooth or hairy with soft hairs along the veins on both sides of each vein (pinnate). The stems are green and sometimes purple when young but turn brown as they mature. Bindweed climbs by means of its tendrils which attach themselves to other nearby plants such as fences, railings etc., hence its common name “creeping Jenny”. 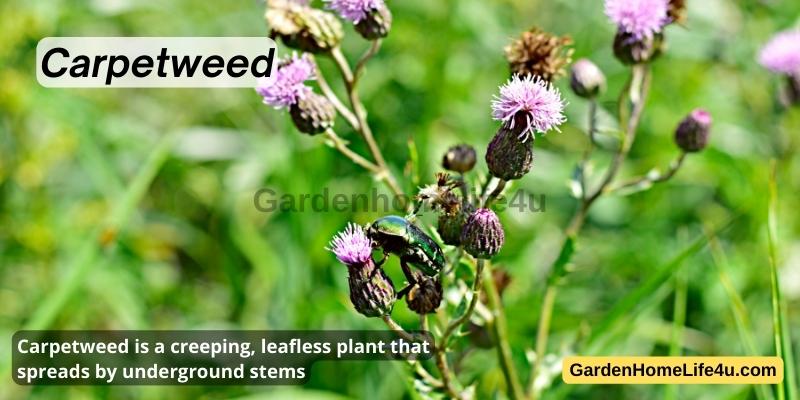 Carpetweed is a creeping, leafless plant that spreads by underground stems. It is a common weed in lawns and gardens.

Carpetweed can become established in soils with good drainage and full sun, but also occurs in shady areas where the soil is compacted. The plant usually produces white or cream flowers during the summer months (June to September), however, these may not be present every year depending on habitat conditions at the time of flowering.

Horsetail is a perennial plant that grows in the wild, in woods and on riverbanks. It is a member of the grass family. A single stem can grow to 6 feet (1.8 m) high and if not controlled, it will spread into dense mats as rhizomes from which new shoots emerge each year. The leaves can reach up to 12 inches (30 cm) long but are usually between 2-4 inches (5-10 cm) long with pointed tips at each end of their narrow blades – they sit opposite each other along the stem with an occasional one up on top!

The flowers appear in late spring or early summer above clusters of overlapping bracts which together look like two pairs of horse’s ears giving this plant its common name ‘horsetail’. There are male and female heads on separate plants; both have bisexual capsule fruits containing numerous small seeds which are dispersed by wind once they burst open during late summer/autumn months. 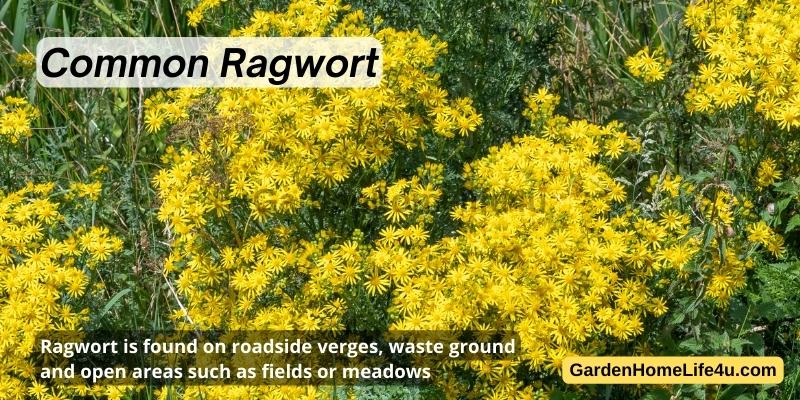 Ragwort is a perennial plant with yellow flowers and blooms between June and September. It can grow up to 10cm tall, but its leaves are a distinctive feature – they are bright green in colour with large oval shapes. Ragwort is found on roadside verges, waste ground and open areas such as fields or meadows.

ALSO READ  How to Save on Day to Day Garden Maintenance?

Ragwort is highly toxic to horses, causing photosensitisation which can lead to skin inflammation and tumours if eaten by horses in large quantities over a long period of time (more than one year). Ragwort causes dermatitis in humans who handle it raw or in hay where it has been cut during haymaking season as well as allergic reactions when touched directly by hand without wearing gloves. 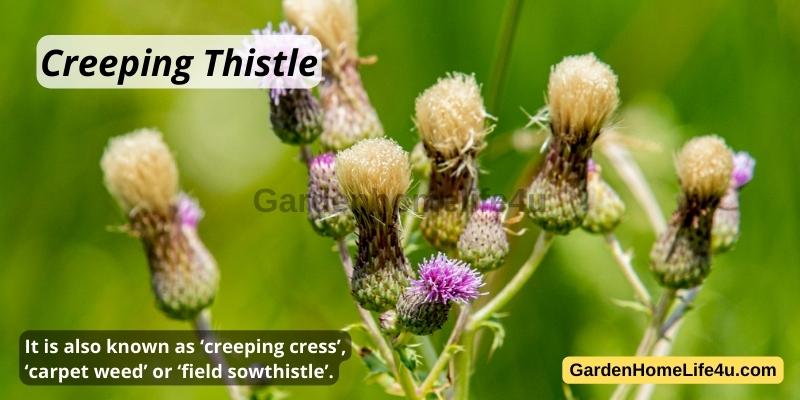 The creeping thistle is a biennial plant. It grows from a rosette of leaves for two years, with the second year flowering and setting seed. The flowers have four petals each and are yellow-orange in colour. It is also known as ‘creeping cress’, ‘carpet weed’ or ‘field sowthistle’.

It grows on roadsides, footpaths and other disturbed areas where it can form dense mats that crowd out other plants. Creeping thistle can be found across England and Wales but is especially prevalent in southern regions such as Devon, Cornwall and Somerset where it has been recorded in habitats ranging from salt marshes to sand dunes to meadows alongside hedgerows 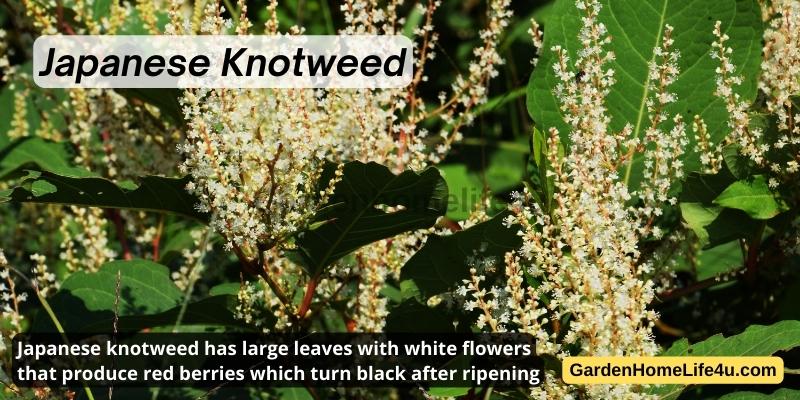 Japanese knotweed is a perennial, herbaceous plant that belongs to the buckwheat family (Polygonaceae). It is native to East Asia and was introduced into Europe in the 19th century. This invasive plant can spread rapidly under favourable conditions and can grow up to 3m in height.

Japanese knotweed has large leaves with white flowers that produce red berries which turn black after ripening. The rhizomes of this species are also highly invasive, providing for rapid dispersal of seeds as well as vegetative growth at nodes along its length. 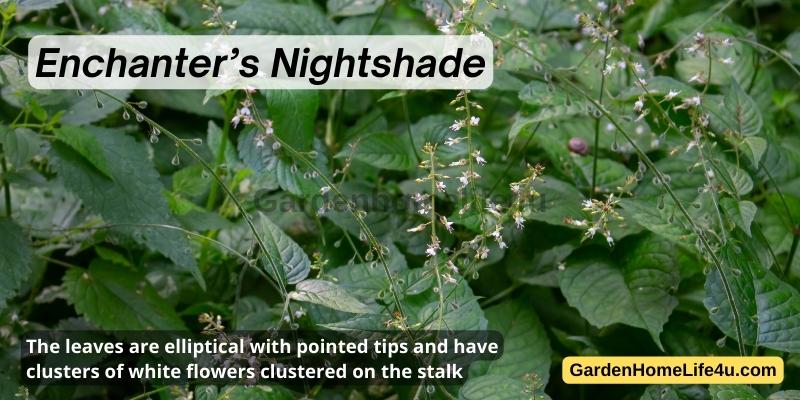 This plant grows in shady places in woods and is a common weed of woodland edges and hedgerows. It grows up to 1m tall with a creeping rootstock that can spread over an area of up to 5m². The leaves are elliptical with pointed tips and have clusters of white flowers clustered on the stalk. The fruit is a berry-like capsule containing many seeds within it.

The plant appears from spring until late autumn but can remain dormant under snow during winter months if conditions are cold enough for the seed to survive below frost level. Control by removing young plants by hand before they become too large or thickly sown; follow up by digging out any remaining roots later in the year when you can see them clearly above ground level 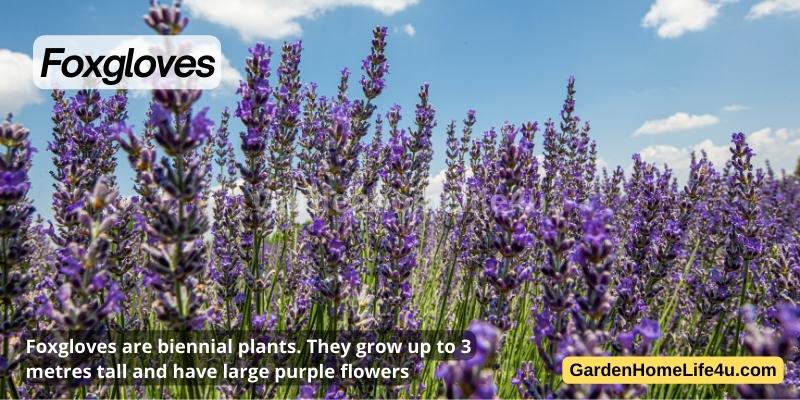 Foxgloves are biennial plants. They grow up to 3 metres tall and have large purple flowers. The leaves are heart-shaped with pointed tips and serrated edges. The flowers of foxglove can be white, pink or purple with a bell-like shape at the top of each flower head.

Foxglove is poisonous and should not be eaten in any form. If ingested it can cause stomach pains, diarrhoea and vomiting. Foxglove is an invasive plant that can spread quickly due to its long tap root which will reach deep into the ground for water and nutrients so that it doesn’t need much soil to grow healthy roots 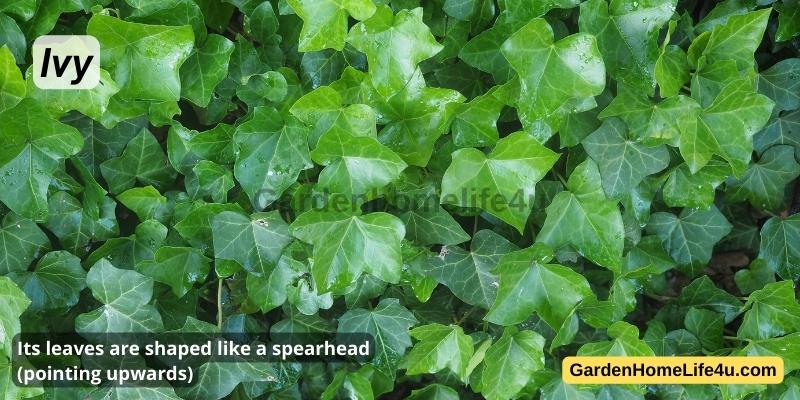 Ivy is a climbing plant that grows in damp areas, such as the edges of ponds and streams. It can grow tall, up to 10 feet high! Its leaves are shaped like a spearhead (pointing upwards). Ivy has white flowers and clusters of berries that look like grapes during the summer months. 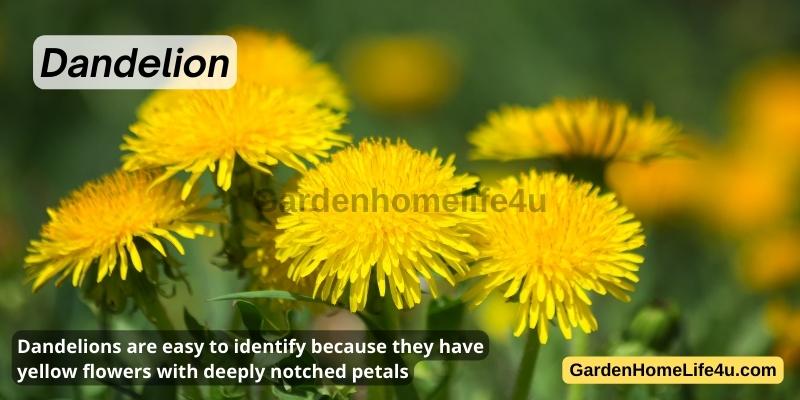 Dandelion (Taraxacum officinale) is a bright yellow flower with a jagged edge that grows in fields, lawns, and sunny areas. It has small leaves that grow in groups at the base of its stem. The root of this herbaceous perennial plant is often used as a medicine to treat liver problems and other conditions, but dandelion can also be eaten as food or used as an ingredient in herbal teas or other products.

Dandelions are easy to identify because they have yellow flowers with deeply notched petals that form round heads on long stems above ground level; they also have bright green leaves growing at ground level just below where those stems meet their roots.

These weeds can be easily controlled by pulling them out by hand when they’re young (before they flower), although you might want to wear gloves while doing so since some people may consider these plants poisonous if consumed in large quantities over time! If you plan on planting any type of garden down there then consider using pre-emergent herbicides instead since these chemicals will prevent seeds from germinating in order but won’t kill existing plants unless sprayed directly onto them–and even then it takes repeated applications for weeks before most weeds start dying off! 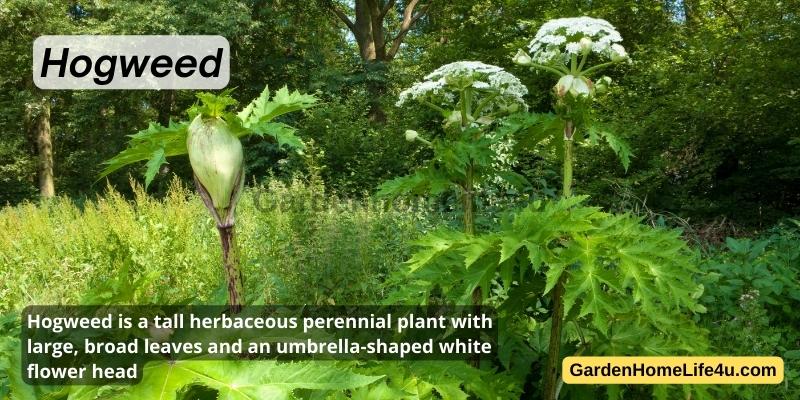 Hogweed is a tall herbaceous perennial plant with large, broad leaves and an umbrella-shaped white flower head. The flowers are followed by black, shiny seeds. The flowering period is from July to September and each flower has around 100 seeds which may remain viable in the soil for up to 20 years.

Unlike other plants in this section of the guide, hogweed does not produce a distinctive smell when crushed or bruised but it can cause severe skin irritation if handled without gloves (see below). 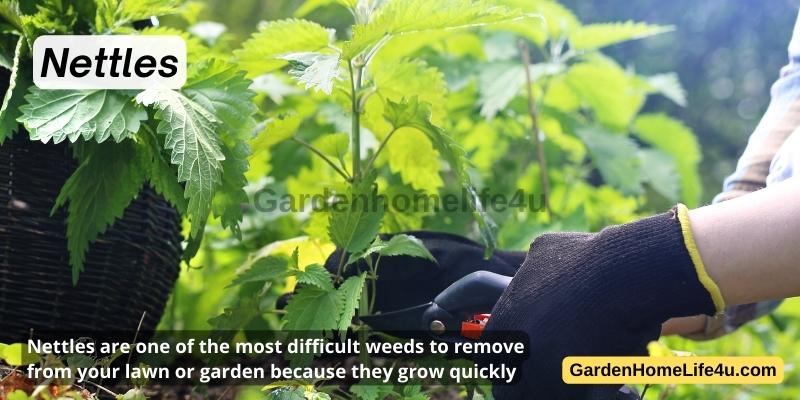 Nettles are a common weed in the UK, and they can be easy to identify due to their yellow flowers and green leaves. However, these weeds can be harmful to humans if you touch them because they have tiny hairs that sting when you come into contact with them.

Nettles are one of the most difficult weeds to remove from your lawn or garden because they grow quickly. They often appear in clusters and need proper treatment with herbicides for effective removal.

It’s clear,  that the UK is home to many different types of weeds. These plants can be found in many different places and have a wide range of effects on their surroundings. If you have any concerns about any of these species, please get in touch with us so our team can help identify the problem and offer solutions.